The Author of the Project:

I am currently 34 and reside in Ohio. Happily married and the proud father of 3 boys. My hobbies and interests include spending time with my children, my computer, football, astronomy, weather, and music. I like a wide variety of music. I grew up in the 80's-early 90's and found a liking to rock and metal music. When the weather is nice I try to take the boys out looking at wildlife and for snakes. We have gone out looking for aurora and checked out several meteor showers. I try to do almost everything else with my computer. The boys of course each have their own computers with DVD drives so I can burn movies for them to watch. So I am trying my best to turn them into "mini-nerds" like their father.

I am employed at a local computer shop. I had worked in the food industry since my late teens. I started at McDonald's after high school while I was going to college. I decided to drop out of college so I stuck with McDonald's. Eventually being promoted to an Assistant Manager, after 6 years there I grew tired of it and moved on. I was then hired as an Assistant Manager for Arby's. They had much better pay and benefits, I needed now that I had a family . However, after 4 years there I grew tired of the long drive to work so I looked for something closer to home. I was then hired as an Assistant Manager for Bob Evans where I spent a year and a half. I do want to eventually start taking some college classes and take some certifications so I have them under my belt. It's very hard to support a family, go to college, and work on a popular project (UBCD4Win), but I am sure I will someday soon! 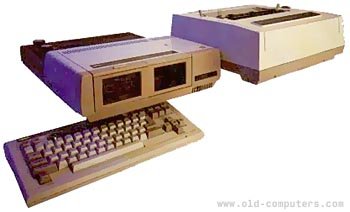 I started "playing" with computers when I was 9 or 10. My mom purchased an Adam computer in the mid 80's for me that was on sale. Thanks old-computers.com for the picture from your archive. It was pretty cool because it had cassette tape drives! It eventually broke so I took it apart just like I did when our Atari systems broke.

I got my first Intel based PC while in jr. high school. I started with an XT, CGA monitor, no hard drive, DOS 3.3, and a single 5.25" drive. I eventually upgraded that system to dual 3.5 drives (so I could copy disks quicker), a 1200baud modem, and finally bought a 40Meg hard drive for about $300!!! I can't remember if I wanted a new system or if I broke that one, but I jumped forward again....to a 386. That had a VGA monitor and came with a hard drive. I eventually bought a 486 and my last thoughts about that was using Windows 95 on it. That system broke during the first year of my marriage. With 2 boys (at the time) I couldn't afford to get another. So I was forced to take a hiatus from the PC world. After several years I couldn't take it anymore and was forced to do something I swore I never would. I had to rent one!! I really hated paying all that money for a crappy Celeron, but it had a CD burner and I was just happy to finally be back! After a few months my mom bought me a decent PII system with a 17" monitor for Christmas that year, it was used but was better than the Celeron. I then built my own system months after that, MY official Christmas---tax refund! So I leaped to a P4 1.6 with 512 DDR. It was a decent system at the time I put it together. After several other smaller upgrades I then put that P2 back together so my wife would have a computer also. Months later I found the original UBCD and started distributing it and was very active in the Yahoo group and several other forums. 6 months later I found AutoPatcher and was amazed at how awesome it was, so I started distributing that CD also. When the request for a Windows version of the UBCD came up I hesitated for a few days. But since no one else volunteered to start the project I figured I had time to take it on and to help people. The project has been in existence for over 6 years now, I have never regretted starting this project!! Helping the thousand plus people we have over the years makes us all extremely proud!

Lives in Montana, is married and has two children. I wish my memory was better so I could write more about him. I guess he has been too busy to get a writeup about himself to me. Since Bart changed the way BPE handles drivers he has taken it upon himself to head the "drivers" download. Thanks for that extra help!

Stidy has a family, just not sure how many children he has. We've never talked about that much. I have rarely had a chance to chat with him so I honestly don't know that much about him. He lives in the United Kingdom. Stidy posts a lot in the forum, he is still the post leader! Even though he has been considered a "posting whore" in the past, his posts greatly help keep everyone informed of the latest news and developments in the PC world.

I have talked to Tom several times on the phone, however I still know little about his personal life. When we talk we always talk about our projects and other computer related topics. I do know that he lives in Nebraska, and he has a daughter. We started talking back around November 04. He noticed that his project (EzPCFix) was included in the UBCD4Win project, so he emailed me. I emailed him several times over the course of the first few months asking him if he needed any help with his project or anything else. We finally started a support and news area in the UBCD4Win forum in May 05. We are always working together to try and make our projects better. I made him a Moderator in May because he needed the access for his EzPCFix area in the forum. He has been really helpful in the forum with UBCD4Win and always posting new beta's of EzPCFix. Around August 05 he had the brilliant idea of creating a "Configuration Tool" for the project. We have spent many months adding features to it and beta testing it. It will soon be an important part of the project. Thanks for your help, time, and support for both of our great projects!!

John found the project around September 05. He really liked the 2.55 version of the project and thought that that version was pretty good. He has been an active member in the 911 CD Forum for a long time and has a great knowledge of Bart PE. He is an extremely intelligent guy, he really knows how to get things working correctly in the project. Thanks to his hundreds of hours of work on the "core" for version 3.0 many underlying issues that existed in previous versions of the project have been corrected and new doors are open for more features!!

Bernd found the project around the same time as John. He had several reasons for wanting to join our forum and project. He is well known at the CDForum for many of his tools and plugins such as PreShell. A new version PreShell debuted in version 3.0 of the project. He is constantly working on PreShell making it better. Recently he has also been helping Tom with the "Config Tool." He is also an extremely intelligent guy, knowing how to program in several languages and is working on a few new things for a future release of the project.

Bernd lives in Germany. He purchased his first computer back in 1980 a Sinclar zx80. A year later built a new one based on a Tandy TRS80. He created this computer with more memory and a floppy disk controller. He also created several I/O cards for that system. In the 80's he worked for several different computer shops until 1985 when he opened his own shop. About 6 years ago he was asked if he wanted to teach some classes at an adult education center, which he gladly accepted.
Some of his other hobbies include motorbike and parties! He married his wife here in the states in Las Vegas at the Little Church of the West.

I think that his accomplishments are just simply great!! He is one of the early pioneers in the home pc business. Being in business for 20 years and teaching for the past 6 are incredible achievements! I know he has to be a well respected member of his community because of several messages and posts every December, it seemed like every other day he has a Christmas party to go to!

Randy found the project a few years ago. I'll get more information added to this "bio" soon.

Many users of the project have voiced that this project really needs a "development team." I agree but it's very hard to find people with great knowledge, the willingness and time to help me with the project. I must say that I and the project have been really lucky because we have a few great guys that are willing to help. They all have different strengths: either programming, knowledge of BPE, working with drivers, etc. I believe that we see "eye to eye" on what the project needs to do and the direction the project needs to go. I am very happy and lucky that these guys have found the project and are willing to spend their time to help make it better! Thank you for all of your great work, because of you guys the project will continue to be the BEST boot CD available!!!!

I really appreciate my Moderating team and find myself very lucky that these great guys found my project and were willing to help. They all have different strengths and enjoy helping members in the forum. The fact that the project has Moderators in several European countries, and others reside in 3 out of 4 of the continental US time zones is great! This greatly helps the support that we can offer the users of the project. With us being spread out in so many different time zones, at least one of us is almost always in the forum!! Thanks guys for a all of these great years and I know we will continue to kick ass in years to come!!

This is a team of individuals started in May of 2005. This is a great group of people that are willing to spend some of their free time testing new versions of the project before they are released. This group was long overdue, since we cannot always catch mistakes that we've made before releasing a new version. Yes I spent a lot of time testing my builds before a new version was released, but I occasionally missed things. They have really been put to the test over the last few months as we have tested many betas in that time. This group will forever change and evolve, testers will come and go. Sometimes members can only test for a few months or something comes up in their life that stops them from testing. I greatly appreciate all that have and will help in the future with testing. Thanks for offering your time to help me make the project better and give thousands of users error free future versions!!